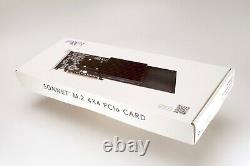 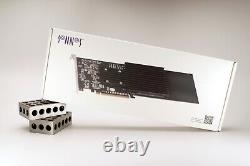 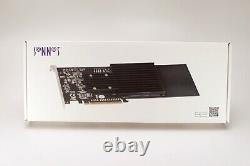 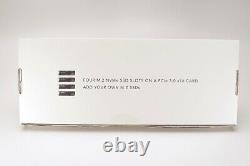 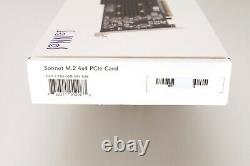 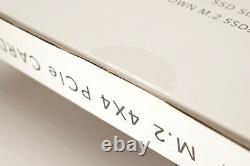 2 4x4 Silent PCIe Card for mounting up to 4x M. 2 SSD's (not included) to a single PCIe x16 slot. This version is silent, as opposed to the earlier model which had a fan.

Install up to Four M. 2 NVMe SSDs into a PCIe Card Slot Ultra-speed Data Transfers! If you need to add internal storage to your computer and ultra high-speed data transfers are critical to your work, you need an NVMe SSD-based upgrade. 2 NVMe PCIe SSDs offer tremendous performance, but Sonnets M. 2 4x4 PCIe Card enables you to mount up to four of them.

Into a single x16 card slot. Use the Sonnet card for instant-access media storage or as a high-performance scratch disk in your Mac Pro® tower; Windows® or Linux® PC desktop or server; or Thunderbolt to PCIe card expansion system with an available x16 PCIe slot. Are you an Adobe After Effects user? Imagine being able to perform 4Kp60 work in 32-bit linear, or even 4Kp24 with high channel count EXRs (or effects in 8K) where your computer's onboard storage couldnt keep up!

Legacy Mac® users can install macOS® on one SSD to create an incredibly fast boot drive and create a RAID 0 set with the other installed SSDs and still obtain blazing-fast performance. No matter how you use it, this card can transform the way you work. Full Performance Design Sonnet Advantages.

2 4x4 PCIe card is a full-height, full-length PCIe 3.0 card with a 16-lane (x16) interface, designed to support full performance from four SSDs. Unlike similar adapter cards, the M. Features a 16-lane (x16) and devotes four lanes of PCIe 3.0 bandwidth to every SSD you install (instead of limiting the x4 bandwidth to two SSDs at a time). Is Mac, Windows®, and Linux® compatible.

Works with a wide variety of single- and double-sided M. Is self-contained and doesnt require a specific motherboard to operate or specific SSDs to support RAID features; no PCIe bifurcation required. Compatible with 2019 Mac Pro. Adds Ultra-Fast SSDs to Your System. Achieve Sustained RAID 0 speeds up to 11,700 MB/s. Great Way to Add Up to 32TB of M. 2 SSD Storage to Computers with Thunderbolt. MacOS, Windows, and Linux RAID Support. MacOS Boot Support from Single (non-RAIDed) SSDs. 2 4x4 Silent PCIe Card Quad M. 2 SSD carrier board FUS-SSD-4X4-E3S" is in sale since Thursday, July 15, 2021.